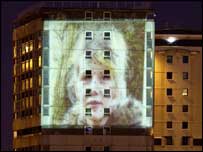 A 60ft high picture of a murdered prostitute has been projected onto a derelict block of flats in Glasgow.

Detectives hope it will help to turn up clues about the death of Emma Caldwell, whose body was found in woods in South Lanarkshire on 8 May.

The image was displayed for four hours on the multi-storey flats in Cumberland Street, Hutchesontown on Monday night.

Police said the site had been chosen as it was visible across areas frequented by Emma and other prostitutes.